24 Aug, 2022
• Themed “Human Trafficking in the Digital Space”, the campaign highlights potential dangers of digital space and warns against modern technologies that lack family control Dubai, July 30, 2022: The Dubai Foundation for Women and Children (DFWAC) has joined the world in celebrating the " World Day against Trafficking in Persons", which falls on July 30 of every year, by launching an awareness-raising campaign. Themed "Human Trafficking in the Digital Space," the campaign aims to educate people about human trafficking crimes and bring attention to the suffering of victims, promote and protect their rights. The campaign comes as a part of a series of initiatives launched by the Foundation to protect children and women’s rights and enhance public awareness of the grave dangers that can arise from abuse or trafficking in women and children. The campaign has warned against the potential hazards of digital space and current technologies that lack family control, allowing them to be used to entice children and women either by employing video technology to broadcast services, announcing fake job ads, or luring and deceiving people through social media and Internet pages. Speaking on the occasion, H.E. Shaikha Saeed Almansouri, Acting Director General of the Dubai Foundation for Women and Children, stressed that the campaign aims to raise public awareness of human trafficking crimes while also supporting the UAE’s ongoing efforts to curb its dangers all around the world. It also comes in compliance with the UAE’s national strategies aimed at eradicating injustice that victims are suffering from due to this scourge, which does not exist in the UAE. "The changes taking place all over the world, along with the global expansion in the use of digital space, especially during the spread of COVID-19, have doubled the challenges and risks of human trafficking crimes on the Internet and digital platforms, which have become an indispensable platform for pushing dubious ads to lure and traffic in children and women."," Almansouri said. She emphasized the importance of enhancing trust between parents and children and strengthening positive family control over the content and platforms that their children are following in order to protect them from being victimized by criminal groups, calling on women to ensure the credibility of online job ads before applying to avoid being deceived by human traffickers. According to the campaign, the UAE has reported a low prevalence of child and female exploitation, citing official statistics from the Global Report on Trafficking in Persons 2020, which was published by the United Nations Office on Drugs and Crime. It revealed that the country recorded the lowest rates of human trafficking crimes, with 5 incidents of exploitation through social media platforms being reported between 2004 and 2006, involving 39 victims, while the nation reported 27 cases between 2016 and 2018, affecting 160 victims. The campaign focused on several issues that need to be brought to people's attention, including "How to protect yourself from online exploitation," "Beware of weird add-on requests," "Do not disclose your privacy through the digital space," "Beware of fake job ads and ensure their reliability to avoid falling victims to scams," and "Report suspicious ads and do not share them." The foundation urged the public to use the Internet and social media responsibly in order not to be victimized by human traffickers, in addition to strengthening cooperation and joint work with the private sector to harness innovation and the latest techniques and develop sustainable technology-based solutions that can support national efforts aimed at preventing and combating human trafficking.
English
Saturday, July 30, 2022 - 12:45 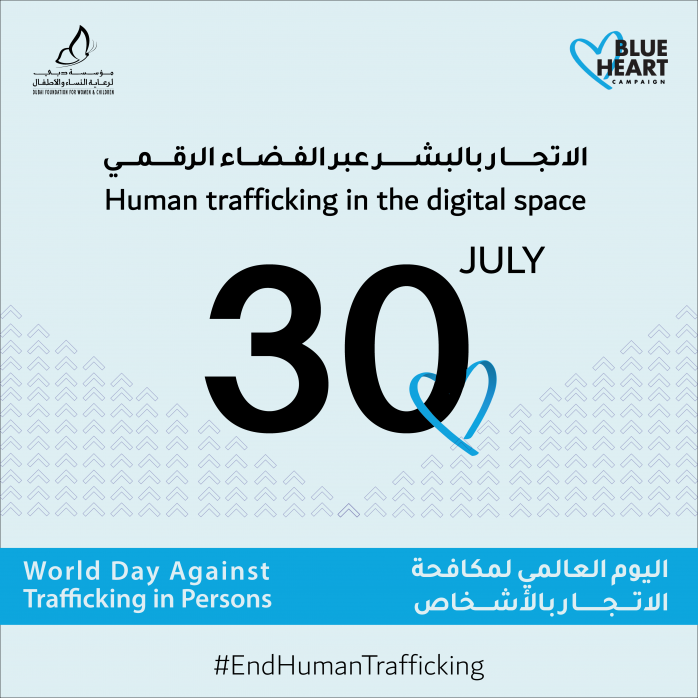